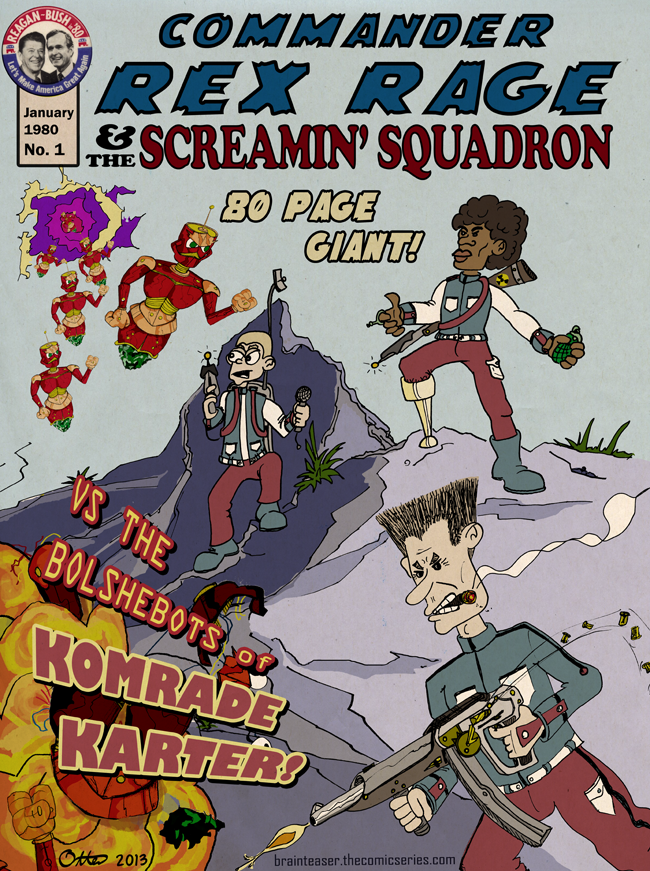 Rex Rage and the Screamin' Squadron was a controversial campaign comic released by the Reagan Campaign for the 1980 presidential election in July of that year, but cover dated for January.

In the comic, Rex Rage and the Screamin' Squadron were frozen in suspended animation at the end of World War II to be thawed out if the enemies of freedom ever rose up again.

When the comic opens, the Year is 2079 and Komrade Karter has taken over Planet America with his mindless, godless Bolshebots, he's destroyed the economy, and enslaved all the women.

The last freedom fighter on earth, young Billy Blaster, finds the Squadron and thaws them out, only to be immediately disintegrated by one of the bots. Rex Rage vows revenge and the Squadron embark on the task of freeing Planet America from the clutches of the Commies.

The Rushin' Russian - the tale of a Russkie Cyborg in a race against the Squadron to a hidden cache of fighter aircraft.

The Missile's Defense - Saturn Jones, alone, must fend off wave after wave of Bolshebots and protect new recruits to the Squadron's cause.

Chatterbox and The Lady in Red - Chad falls for a former agent of the Commies. Has she really seen the bright light of Freedom?

The Rage of Freedom - The Penultimate tale, Rex is captured, but escapes with knowledge of the Commies plans to finish off the Forces of Freedom...FOREVER!

Nuke 'Em Til They Glow and Shoot 'Em In The Dark!- The controversial final story in the book. Rex Rage, The Squadron and the New Freedom Fighters commandeer strategic bombers and carpet bomb all of Eastern Europe and the Soviet Union with 1000s of nuclear bombs, reducing large swathes of the planet to rubble. Planet America is re-established and the former Eastern Bloc is literally turned into the parking lot of a giant shopping mall filled with happy Planet Americans engaging in commerce. The Carter Campaign used the book to criticize what they considered Reagan's reckless foreign policy.

Currently very hard to find in ANY condition.

Email ThisBlogThis!Share to TwitterShare to FacebookShare to Pinterest
Posted by Brainteaser Comics at 12:09 PM