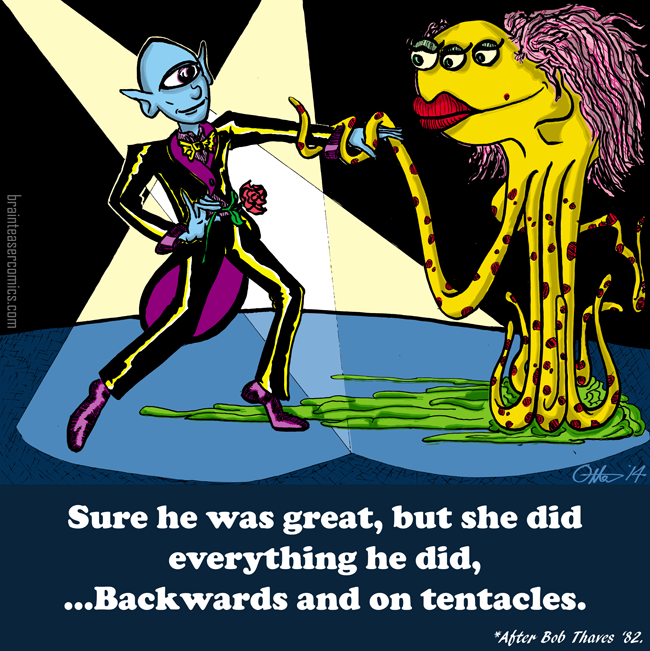 This is the 100th Brain Teaser Comic, and this particular strip has a bit of an odd history.

It started with a completely different caption, but my wife reminded me of the popular saying about Fred Astaire and Ginger Rogers... Namely, that she did everything he did, but backwards and in high heels. That was much funnier than what I'd originally written, so I adapted it to our alien entertainers in the strip. Thanks dear!

I did some research on the saying and in a bit of synchronicity I found out it actually originated in a comic. The saying (usually attributed to Astaire) originally appeared in a Frank and Ernest comic by Bob Thaves from 1982. So, Thanks Bob!

I am very excited to announce that starting in September, I'll be releasing new strips twice a week, on Mondays like always, and Wednesdays too! Twice the Brains!

So that's new Brain Teasers on Monday and Wednesday, plus a new Media Montage Podcast every Friday. Its been a great 2 years, and I'm very excited to be starting the third year of Brain Teaser Comics, as well a the second year with Media Montage. These projects have been a ton of fun to work on and share, I hope I've made you laugh, or groan, or shudder once or twice.

Thanks you for joining me for the first 100 installments of Brain Teaser Comics, and I hope you'll be here for the next 100!

Email ThisBlogThis!Share to TwitterShare to FacebookShare to Pinterest
Posted by Brainteaser Comics at 11:44 AM