Multiversal Pictures: Out of Time 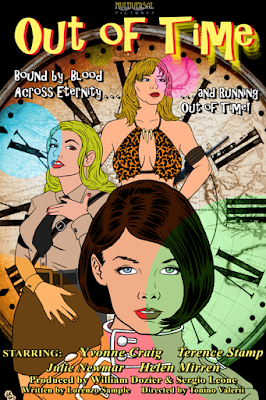 Ms. July (Yvonne Craig) is a time agent from the far off future of 20XX, whose own bloodline becomes threatened by time assassin Mr. Ram (Terence Stamp) who's plotting to kill her ancestors!

Traveling back in time to Nazi Germany she meets her great, great, great grandmother Helga (Julie Newmar) and eventually ventures back to 10,000 B.C. to fight Mr. Ram alongside her ancestor Ta'roon (Helen Mirren). Can Ms. July save her future by traveling to the past, before she's out of time?

Produced by William Dozier (TV's Batman) and Sergio Leone (Fistful of Dollars) with script by Lorenzo Semple, and directed by Tonino Valerii (Day of Anger). The film premiered at the 22nd Cannes Film Festival in 1969 it wasn't well received, and has gained cult status over the years due to overnight showings on local and cable TV.

Art and Write up by Larry King

Special Thanks to Larry King for helping me with some fill-in material over the last few weeks while I prepare for Denver Zine Fest!
Email ThisBlogThis!Share to TwitterShare to FacebookShare to Pinterest
Posted by Brainteaser Comics at 7:12 AM