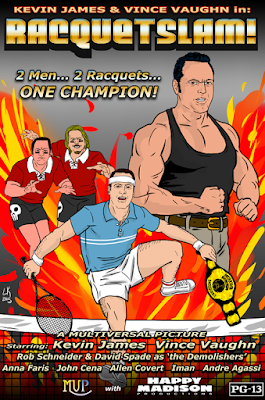 Walter and Benny are The Demolishers, two-time doubles champions of World Xtreme Tennis, trying to mount a comeback.  They need help and Alex needs the money.  He only agrees to train them, but before you know it he's burning up the courts in WXT singles competition as 'The Ace' and getting on the nerves of WXT's megalomaniac owner Lance Vanders (Vince Vaughn).

Alex also catches the eye of WXT Women's Champion Valerie Vixen (Anna Faris). Lance has his own designs on Valerie and he vows to destroy Alex, The Demolishers and anyone who sides with them.  It all comes to a head at RacquetSlam the Pay Per View that will make or break WXT!

With cameos from the worlds of both Tennis and Sports Entertainment, RacquetSlam serves up  Xtreme action and Xtreme comedy!

Email ThisBlogThis!Share to TwitterShare to FacebookShare to Pinterest
Posted by Brainteaser Comics at 2:10 PM