Yesterday I attended Denver Zine Fest 2015 put on by The Denver Zine Library and Denver Art Society. This was a fantastic event, I met tons of cool local creators, and there was a steady crowd over the course of the whole day. I stayed busy talking with other zinesters, cartoonists, and fans of the whole zine/minicomics DIY ethos. I really want to commend Kelly and the rest of the crew for putting this together! 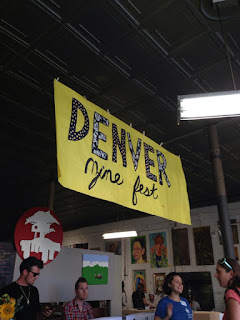 It wasn't a large convention by any stretch and that was its great strength as an event. Everyone there was very into what the creators were doing and promoting. No celebrity photo ops here, just people making things, and putting them into the hands of readers. I had a table and was selling mini comic compilations of Brain Teaser as well as some minis of material at Blank Tape Comics.  I also had some of Larry King's stuff for sale and one of his pieces was seemingly irresistible to the crowds. We'll talk about that more on this week's Media Montage Podcast! 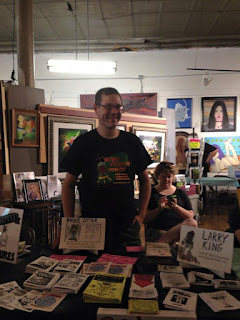 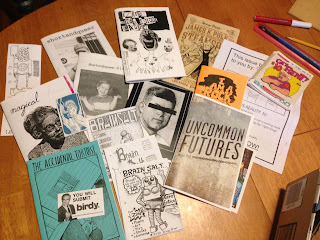 I had great neighbors, including Chris from the Uncommon Futures zine, Zak from Midspace, and a bunch other stuff. The event gave me a lot to think about, as it was the first time I've ever had a table. Talking with other creators, and seeing how they promote, design and distribute has me rethinking some old approaches and considering many new ones.  I'm really glad I went for the table instead of just attending as a visitor. Getting the 'behind the table' perspective was eye-opening.  I will definitely be attending next year if this becomes an annual event.

Email ThisBlogThis!Share to TwitterShare to FacebookShare to Pinterest
Posted by Brainteaser Comics at 6:56 AM