Accidental Cartoonist: The End Is The Beginning

Wednesday would normally be a release day for a new comic, but instead today comes with an announcement.

These day's I'm taking stock of all my projects and of late I have dialed everything back. I am no longer doing 3 podcasts every two weeks and am instead only producing one podcast every two weeks. I was at a point where all these fun side projects were becoming a stress inducing chore. Changing work schedules and a child entering middle school have also been contributing factors to this period of reflection.  As I've freed up some time it has allowed me to evaluate how I spend time working on my creative pursuits.

Brain Teaser Comics drew its inspiration from the likes of Gary Larson and Gahan Wilson, great creators of weird humor in the single panel format. I've had a lot of fun working in that style. I may even occasionally revisit it if I get a particular inspiration to do so, but at the moment I feel it is tiime to move on to some new things. One of the reasons I started doing comics, and the project that Brain Teaser was accidentally born from was a newspaper-style continuity strip.  That has always been my comics dream.

Over the last year of making Brain Teaser, I've thought more and more about a more narrative comic with a regular cast of characters, and telling long form stories.  I currently have such a project in its infancy and we'll see how it goes.  When the time is right, you'll see it here.

I'm going to be doing a lot of sketching, writing and character design, and may share some of that as well.  I'm going to do some painting, which I dabbled in a little last year, greatly enjoyed, and want to explore some more. I may also put together a few more mini-comics and zines, which I also dabbled in over the last year.  Keep an eye on the Blank Tape Comics site for any of that stuff. I've done some logo and poster design for a friend's new band and will likely be sharing some of that at Blank Tape as well.

In the mean time I want to extend my deepest thanks for everyone who read, shared, reblogged, retweeted, upvoted, starred, liked or favorited any Brain Teaser Comic here, on Twitter, Facebook, Reddit or Tumblr.  I appreciate all your feedback and comments.  The smallest thing like a retweet or a fav can truly make an artist's whole day. It seems like an inconsequential thing, but it lets them know someone cares about the work.  Take a second and click one of those buttons on a comic, article, blog post or whatever. It means a lot.

Email ThisBlogThis!Share to TwitterShare to FacebookShare to Pinterest
Posted by Brainteaser Comics at 1:25 PM No comments:

Do I Have to Spell it Out? 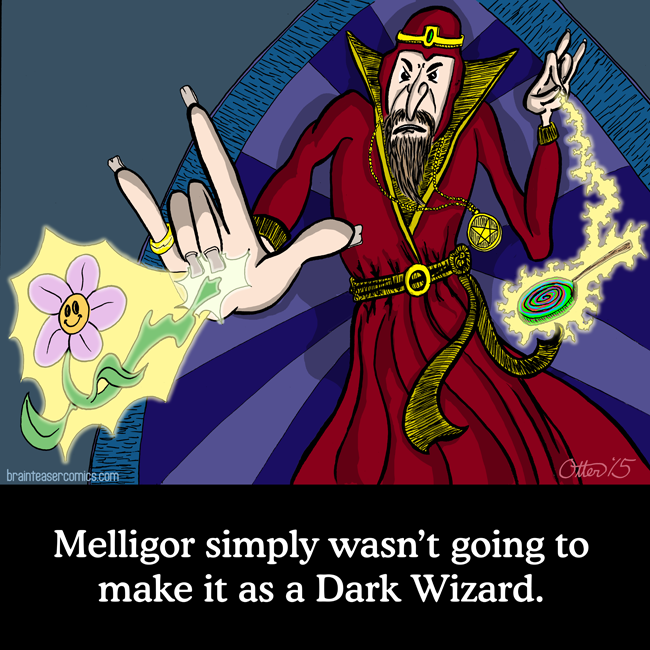 Email ThisBlogThis!Share to TwitterShare to FacebookShare to Pinterest
Posted by Brainteaser Comics at 5:00 AM No comments: 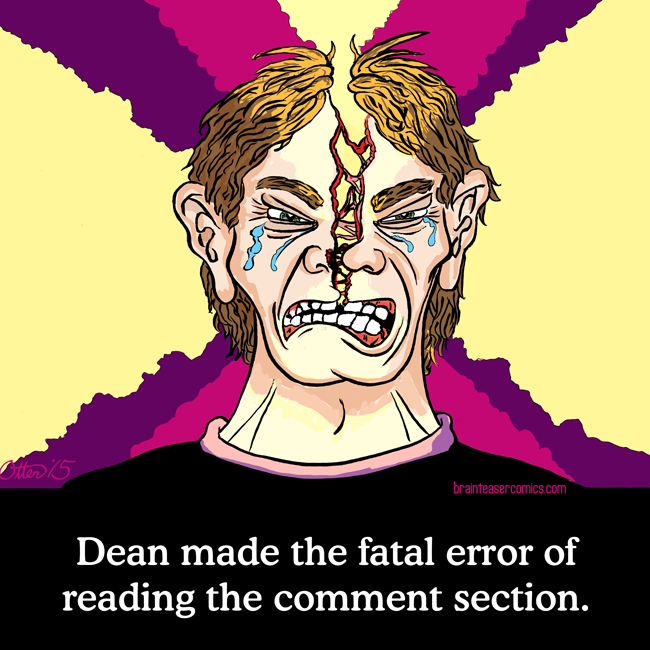 I have, on occasion, made the mistake of getting embroiled in comment section exchanges. I really try to avoid it, but sometimes human nature overrides my rationality and I dive in. It never goes well. Do you ever take the plunge into these senseless battles?

Email ThisBlogThis!Share to TwitterShare to FacebookShare to Pinterest
Posted by Brainteaser Comics at 5:00 AM No comments: